Last July I finished editing and published a book called ‘Social Media in Higher Education’ – it was published by Open Book Publishing (OBP). Social Media is a ‘hot’ topic at the moment and there is plenty of discussion and research happening in this field so I was fairly confident there would be a readership for it in colleges and universities, both here in UK and around the world. I deliberately chose an open access publisher becasue I knew that they would make a free version of the book available to those who wanted it. OBP do a free PDF and HTML version of the book and make avaible via their website, Google Books and OAPEN (who make it available to most academic libraries). They also sell a paperback and hardback version of the book.

As you can see from the stats below its sold 14 copies of the hardback and 39 of the paperback in the the last five months, which has hopefully generated a little bit of income for the publishers. It been interesting to the the stats for the free download increasing over the the last few months. Online readership totals 2421 and total ebook downloads amount to 1167! These figures easily surpassed my expectations and really do show the benifits of open access publishing! 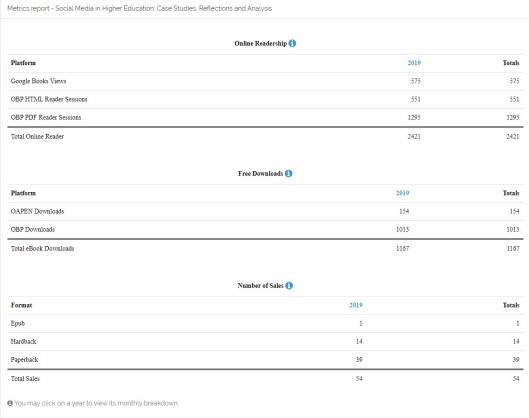 The other thing that did surprised me was the global readership of the book. As the book is written in english, the english speaking coutries have viewed the book the most but  there has been a very wide readership across several different continents: